Under modern grading of authentic kynam,  high end dealers in Hongkong occasionally classify some kynams as golden silk kynam due to the golden silky streaks of resin present in the wood, with the other grades being silver silk, coffee kynam, or simply normal kyara.

In Japan, any Kyaras that have an Oil in its grading/description, i.e. green oil kyara, black oil kyara, yellow oil kyara, white oil kyara, usually refers to the highest grade in the trader language, the golden silk kynam, as golden oily streaks can be seen on the wood on high magnification, thus having the word “oil” included in the color classification.

The golden silk kynam controversy arises because the late professor Liu Liang yu, a leading authority on incense culture and aloeswoods in Taiwan had written in publications the following :

In a rough translation : ” Eaglewood produces both “Red” and “Golden Silk” kynam, of which Golden Silk Kynam (Sasora), has the lightest color amongst all the Eaglewoods, yellow brown fibres with brown resin lines, thus giving it the name golden silk, with its scent profile the most elegant amongst the aloeswoods. Red Kynam has higher degrees of resination, more solid, and is best appreciated in fine bits (powder), where one can appreciate the scent of the South.”

There are times I wished Prof Liu did not publish this, because of the potential confusion that is existing in the market right now. Sasora is not true historical Kynam, not true Kyara, its scent profile possibly gives a little bit of hints in the beginning, but its obvious cool, sour acidic notes, hints of menthol leaves, and the absence of a proper Kyara/Kynam note warrants it as simply an aloeswood. Nevertheless, Prof Liu probably considered the use of the word Kynam in the modern way, as how the world Jade is being used for all sorts of precious non jadeite/non-nephrite rocks these days. 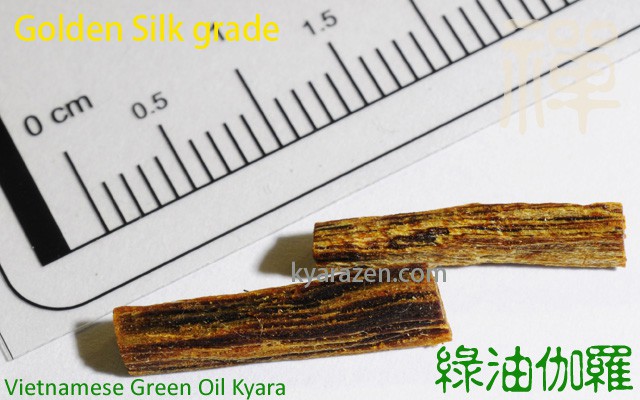 Firstly, the scent profile of Sasora is cool, sweet, menthol like before evolving to a sourness, yet missing the creamy sweet vanillic notes. Green Oil Kyara, on the other hand, is rich, complex, perfumy, powdery, soft, sweet, vanillic, gentle. Their olfactory profiles are dramatically different.

Secondly, the texture is different, that Sasora is hard, whilst green oil kyara is softer, more pliable

Thirdly, green oil kyara is sticky and a little moist, whilst sasora is dry and rough.

Forthly, green oil kyara emits a clear penetrating lovely unburnt scent even below room temperature, but sasora does not emit much fragrance unburnt, just a tinge of sweet herbalness.

So do take note of this co-existence of categories, both classifications have been deeply and widely propagated amongst separate populations of traders, particularly in the chinese market. Therefore it is necessary to do some home work to avoid overpaying on some wood. It is important to see the wood in person, burn a sliver on mica in Kodo-style to experience the full scent profile, and classify base on your own experience. This will indicate how much you should pay for certain materials. Sasora is more abundant than green kyara and price wise, is more than ten fold difference!!!