You are here: Home / Articles / History of Kyara

Comparisons of agarwood and kyara specimens.

Kynam, qinan (奇楠), kyara. The esteemed names of a very precious fragrant material on earth that almost no one seem to truly know in the modern world today. 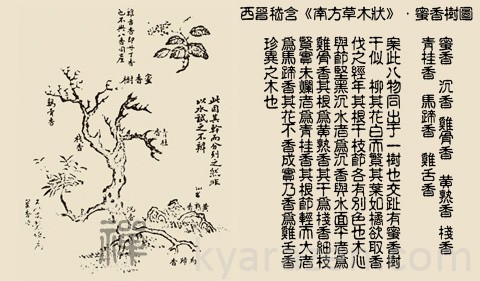 Historically, the Vietnamese called it calambac, in Sanskrit, it was recorded as kala-nam. The chinese words for kynam can be found with two variations of the word qi (奇), of which the former refers to unique, amazing, special. Nan (楠) refers to a certain wood type with three categorical species, where xiang nan or fragrant nan is one of them.

Several written records point to the existence of kyara/kynam like materials to be distinct from normal agarwood/jinkoh. In ancient texts from Western Jin dynasty (AD200), the words honeyed fragrance appear to refer to a soft pliable, honey-like material that was very fragrant.

Shadings of an old incense burner

In the old Nguyen dynasty imperial palace of Huế in central Vietnam, there are large incense burners with carvings of Vietnamese imperial tribute items, where one can find a carving of two types of trees, one known as “chenxiang” or agarwood tree, the other known as “qi-nan” or kynam tree tree.

Comparisons of agarwood and kynam via diagrams in the Chinese Compendium of Herbs.

18th Century pictorial versions of the Chinese Compendium of Herbs (本草纲目) by Japanese envoys in China had also depicted distinctions between an agarwood tree and a kynam tree.

Structurally different in the drawings, it is apparent that such trees did exist, and were specially classified, with the knowledge of being lost over the centuries.

So what exactly is kynam or kyara?… Stay tuned.