You are here: Home / Articles / Why does tea taste different when brewed in Yixing wares Why is Redox (reduction/oxidation) of compounds important in tea? The ancient people had realized that oxidation often resulted in unique and special aromas/fragrances being developed in the tea, that was why oolong teas were born. In the process of making oolong teas, the tea leaves are bruised to allow for controlled oxidation to occur.

Similarly, when one drinks some Wuyi Mountain Rock Tea (yan cha), there is a “yan cha” note in thetea that appears and lingers after the cup is emptied of the brew. You can conduct an experiment by brewing some yancha, pouring it into a cup, and then pouring the tea out into another vessel, quickly sniff the cup and suddenly the fragrant and deep “yan cha” note appears. This happens because of oxidation. When the tea is dispensed out of the cup, leaving a very thin film on the interior of the cup, the air is able to oxidize the thin film resulting in the fragrance development. This can also mean that by having cups of different broadness, from narrow and tall to wide and shallow, or from different materials, can affect the oxidation rate of the tea, with the “yan cha” note appearing at different rates and intensities! I personally prefer a wide shallow cup for “yan cha” than a tall narrow one. The same can be experienced with all other teas if you have that special pair of tea cups consisting of a tall 闻香杯 for sniffing, and a 品茗杯 for tasting, where by you would decant the tea from the tall one into the wider one before drinking. 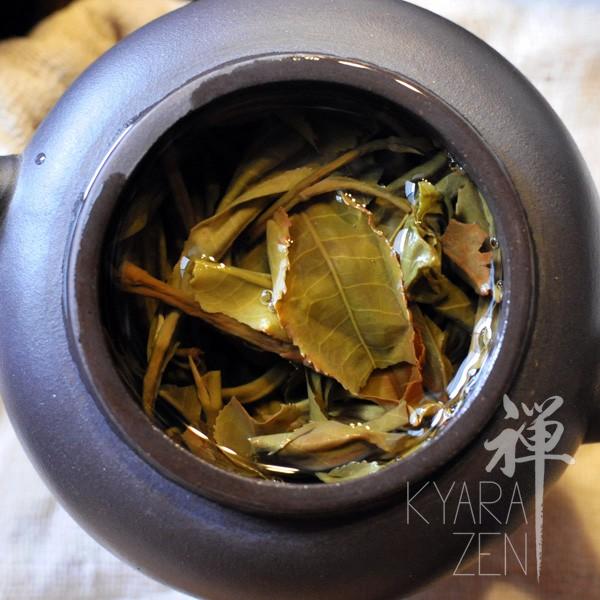 Tea leaves contain a lot of anti-oxidants for a very important reason, for the plant to protect itself from damaging photo-oxidation by strong sunlight and UV. So in a brew of tea, one is consuming a balance of reduced (anti-oxidant) compounds and oxidized ones depending on how the maker had processed the tea, or how the tea has aged etc. Depending on altitude, season, the plant varies its level and types of pigments, and antioxidants in response to photo-oxidation. (this is also a reason why “sun-dried” pu-erh sheng tea matures properly whilst… machine air dried/baked pu-erh sheng teas don’t mature properly! Photo oxidation by light is different from chemical breakdown or oxidation by heat!)

The art of tea is to know the tea, and know the ware, how to complement to achieve improvements in the brew. One can see that most of the aromatic molecules in teas are actually organic in nature, they are a mix of various aliphatic or branched alcohols, keto/aldehydes, or even carboxylic acids such as nonanoic acid. The relationship between these organic molecules are really simple, it is either an oxidation or a reduction  reaction.  (alcohols are more volatile than aldehyde/ketones, or carboxylic acids) 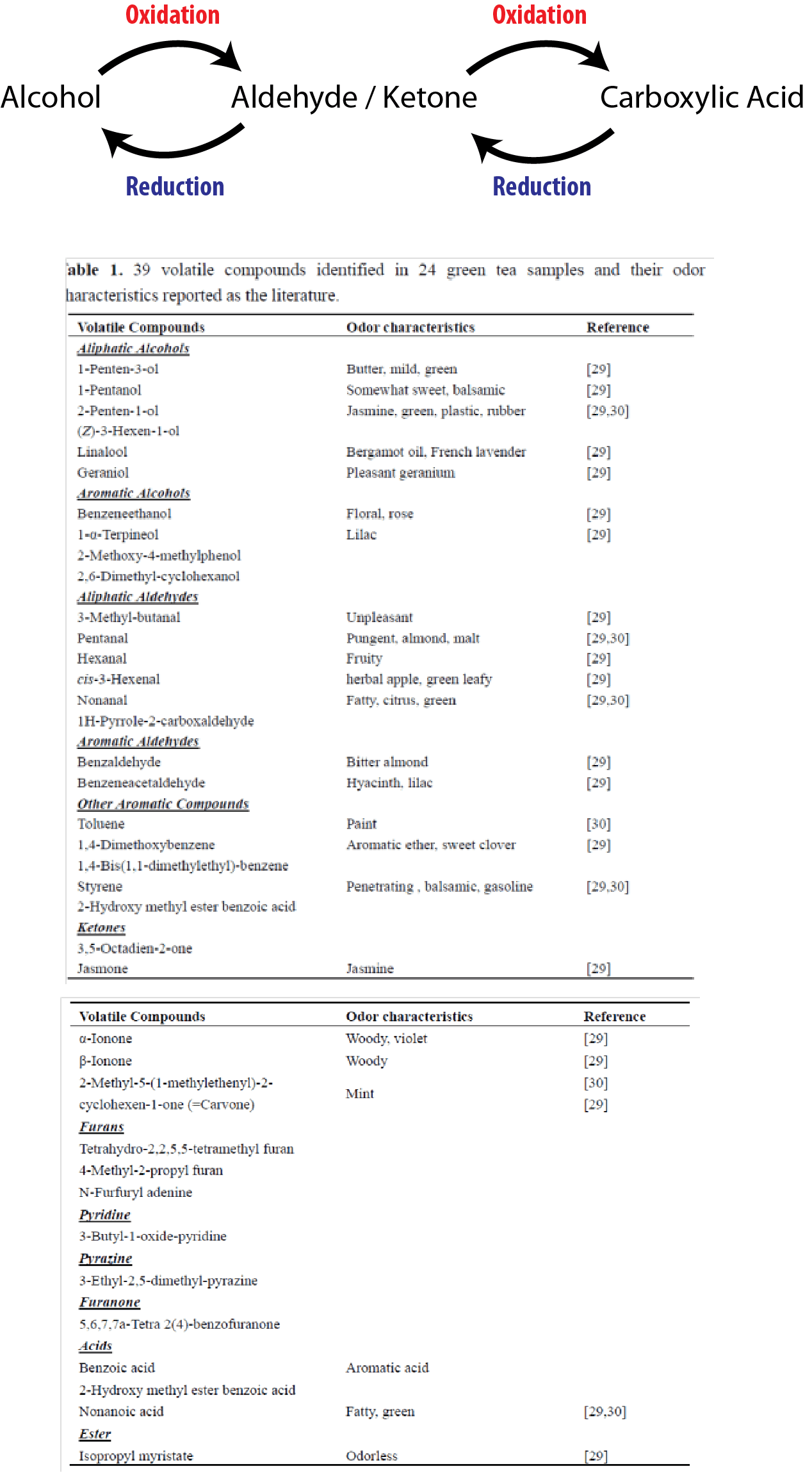 Since Yixing clay is porous, and has excellent redox and potential catalytic properties, it affects the tea brewed in it. I’ve personally experienced that the “yan cha” note was more intense and came quicker when brewed in certain yixing clay pots than glass/glazed porcelain. One can also compare an apple that is cut with a metal knife versus a ceramic one, the one cut with a metal knife browns faster, demonstrating the effects of metal catalysis. If you brew yancha in purion… be prepared for it to be.. strangely ruined in my opinion.

Silicon Dioxide – Aluminum Oxide (complex mixtures of this are known as zeolites, used in petrochemical industries  to break down long complex hydrocarbons), although its unlikely it is going to be a major catalyst in yixing pots as the temperature used here is rather low. On the other hand, the mixture of iron oxide, calcium oxides, titanium dioxide etc can are efficient chemical catalysts, particularly with redox reactions .

How should an yixing pot be selected for a tea then? It is a complicated process and perhaps should be experimental in nature, i.e. brewing many different types of tea in a pot to see the performance,  and most importantly with a ceramic gaiwan or a glass pot as a “control” so that a side by side comparison of the brew can be done. Once a certain pot has been determined to perform best with a certain type/genre of tea, then it can be assigned to the tea type and to be used that way all the time.

In selecting yixing pots, if one wants a pot that is able to “oxidize” tea faster, hei-ni pots, or black clay can be a nice option. I personally prefer to use hei-ni pots with high quality raw/sheng pu-erh, it reduces the astringency and smoothens the brew significantly as compared to a gaiwan. Hei-ni or the lighter type, qing hui/tian qing (green grey, sky green/blue) clay is one of the clays that was said to be extinct since the end of the qing dynasty, possibly with some natural ones rediscovered in the 80s, and was re-developed during the same time by Gu Jing Zhou and other yixing master craftsmen by blending in manganese dioxide into purple clay. Manganese dioxide is a superb catalyst for oxidation reactions.

Food for thought. Perhaps you would like to brew teas in different vessels side by side for comparison, typically with a gaiwan as a control, a reduced type of pot such as a multi oxido-reduced fired purion/reduced fired japanese kyushu, and an oxidized fired yixing. 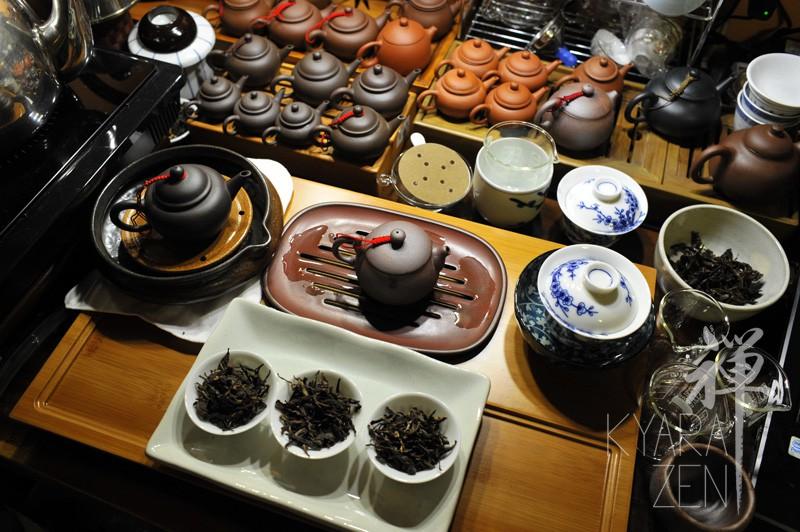 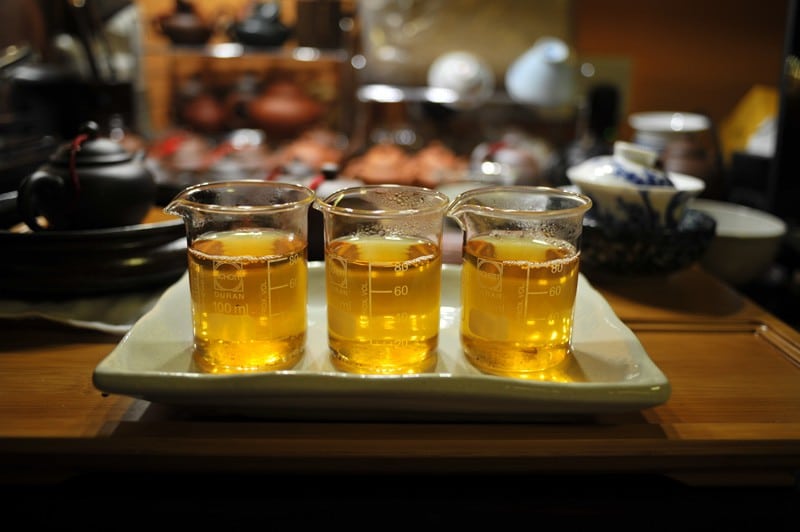