Its been a long hiatus, although most people would know that KZ is still around, still very active if you are following me on my Instagram at Instagram.com/aloeswoods

in the past year or so, I had picked up quite several other hobbies, new arts.. made some significant career and business progressions (in other unrelated spheres).. and in actual fact.. have reverted to a deep philosophical self that I hadn’t seen a reflection of in the past decade.

Almost like hegel’s dialectal pendulum swing.. the oscillations between different polarities will probably be what you will see in my writings this year.

One of the most thought provoking subjects that I’ll begin this year’s writings on.. is on the subject on the Way of Collecting. This precedes other writings to come, including a long awaited tea fragrance wheel (for open source sharing so that everyone can advance together and to which I might even try to apply it to help a really hardworking/honest tea friend in her tea business), and other write ups that will share with you on the journey of collecting/appreciating yixing tea pots and other stuffs. Incense articles and knowledges will be more vaguely expressed, the Kyarazen Book of Incense is still in writing at the moment.

A cyclic world view on the art of collecting. 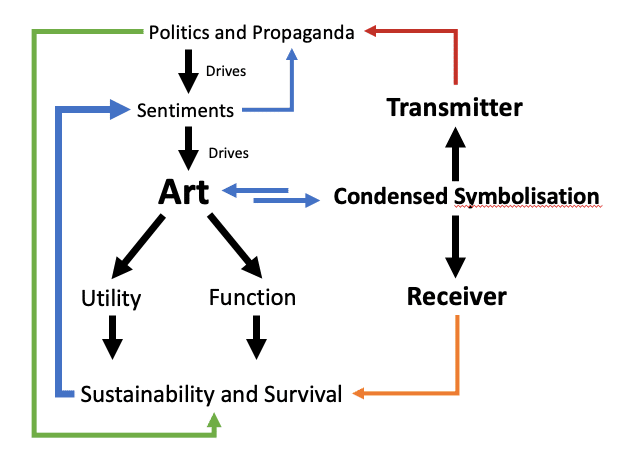 Let us start by having Art as a form of condensed symbolization, or rather, “symbolization being condensed”. What is this strange sounding term here? It simply means a form of mental awareness created by us, and a type of mental projection. If you are religious, ever found yourself in a state of prayer, in an act of pouring yourself out to “God/Gods” that you believe in, a quiet moment, a bowed head, eyes closed, palms together, clasped etc in a single pointed concentration, allowing your feelings to flow out to the interpellatory god of yours, and at the end of it, having a feeling that you had been understood/God had heard you? in this state, what we have actually done is to have some what done away with language, as words, are many times insufficient to express or represent the complexity of things, the degree and intensities of many matters etc. I had a student whom told me she doesn’t pray, but she undergoes these sort of “emotional out pouring” by hugging a huge teddy bear. This form of “expression” or “connectivity with an object” is a form of condensed symbolization. Mental states condensed, symbolized, some what project out of ourselves towards or into objects, to which at the end of it, whether the Gods/God was there, we generate in ourselves a sense of feeling that you are being understood.. and this is empirical satisfaction.

Art in this position frequently becomes a form of condensed symbolization being expressed. The artists has his emotions, sentiments underlying his mental state, through his fingers on clay, through a brush on canvas, through a knive on wood etc, create art. And in this very process, the object receives “life”, it receives “spirit”, or in Chinese they call it the 神韵，神态, which loosely translate as the spirit/soul presence, the attitude. And this is a steep curve in the way of collecting, for the collector to be able to see this condensed symbolization, this life, soul,spirit,attitude of in the art object, or a message, statement or assertion that the artist wishes to convey. If the artist is shoddy, absent minded, you can see the inferiority of these works.

With art being a projection of an artist’s condensed symbolisation, we move into a polarity, where a piece of work is either considered to be a transmitter or a receiver. A piece of work or art being a transmitter is one that comes bearing a story, a message, the narratives, not in words but in some other form of brush strokes, pottery shape, color use etc, a piece of art can transmit the evocations or imageries of a certain “snapshot” in history, a scene, a break through, a success, a failure, to a certain extent even being a mirror that reflects the traits of the particular era the object is from. some statues, iconographies, etc are quite successful in this transmission segment. The transmittive abilities of the artwork would have the ability to influence propaganda, collecting politics, and in turn this feeds people’s sentiments.

On the other hand, there is another polarity, where the piece of artwork is a “receiver” instead. Such instances are exemplified by the viewer, owner, etc, either due to the merits of the quality of the work, beauty, dedication, or even the impossibility of making/craft detailing, to have a strong sense of homage, reverence, respect, and that sort of lord of the rings smeagol and the ring type of affection. Usually such pieces of works become desirable and with that it brings both collectibile and commercial value which can drive sustainability of the collecting market, sustainability in its monetary value over time, and could be linked to the long term interest in the object, and the long term survival of any related artists.

There is a direct path (green line) on how politics and propaganda can immediately have an effect on sustainability and survival, this in term affects the artist’s sentiments, and then exerts its effect on the Artist. Instead of going to the part of expressivity in the form of Condensed Symbolisation, the artist can focus his interest in utility and function, and achieving high degrees of profiency, quality in these two spheres are also, and that can contribute to survival and sustainability,

This all falls into place into a form of cyclic interdependent arisings. But the take home message here must not be lost. When you are into collecting, be it antiques, tea pots, tea, or cars or whatsoever, the first thing you need to decide is

And take it from me, i’m not going to pull of a marie kondo here and ask you “does it spark joy” in a heavy cantonese hongkong chinese accent. But you have to be clear on why you are collecting this item. Can you connect with it and how deeply with it?

The Way of Collecting (2) – Lessons from the Trade

Appreciating Yixing wares and the Sourcing of them