Do you know that there are just countless people in the world, trying to make a fortune from all sorts of materials they try to find from the wild?

Take for example, ambergris, it is quite a dark trade, the amount of rivalry between scavengers (some of them whom even tried to run others down with a vehicle), firing of guns at the beaches, and the amount of non-ambergris materials that people try to pass off or imagine to be the real thing, be it coagulated industrial drain cleaners (of detergent origin, coagulating with sewage oils into floating clumps), sea lion poop, floating rancid lard, and what not! There is a book called Floating Gold, that you can buy off amazon both as a hard cover book or as a kindle soft copy, quite an entertaining read on the dramatic and disappointing journeys of many. As you can see in the pictures below, many were hacking away at this huge lump of white stuff that landed on a beach, thinking that they had struck millions.  Turned out after thorough analysis, it was coagulated lard of porcine origin. 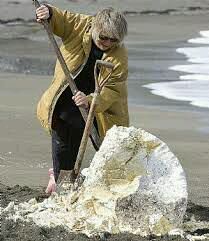 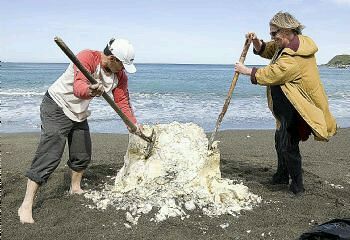 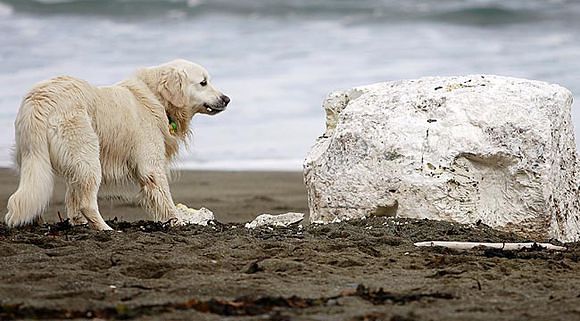 How bad(good) is the ambergris forgery now? Well, a few months ago, a group with existing “stock” tried to hijack a chinese forum and offered ambergris samples for free, that a lot was found at the coast of south china. People bought up hundreds of grams, kilograms in anticipation of a huge profit. Turned out that their material was fake, and a lot of intermediate downlines that were hoping to strike it rich, was stuck with large amounts of fake material, and the uplines at the top, having stirred and fanned the stories, laughing their way to the bank. Now, there is going to be a second wave, with the forgeries even better now, adding in cholesterol, synthetic ambrein, and many other materials to ensure that hallmarks of authenticity are there. Personally witnessing all these, and even having sampled incenses made from such materials.. I refused to comment nor interact with anyone from these trades, neither did I work against them, because no matter what, it is like a mini-religion, there are always devout believers even in the strangest of gods, i.e. flying spaghetti monster god, and in the same way, there are always people whom believe a regular rock to be a diamond.

PS. You know I do at times envy people whom made lots of money from such trades, that they are zipping around in nice cars, staying in lovely homes etc, whilst I’ve been working my ass off, working really hard to build my businesses and career (both unrelated to agarwood and fragrances unfortunately!).. Rolling back five years ago, ten years ago, I could have followed the foot steps of these people, whether by their semi honest or dishonest ways of making a fortune. But I did not, and i do not regret it, because i would just want to live prim and proper, and as upright as i can, rather than some ill gotten wealth. 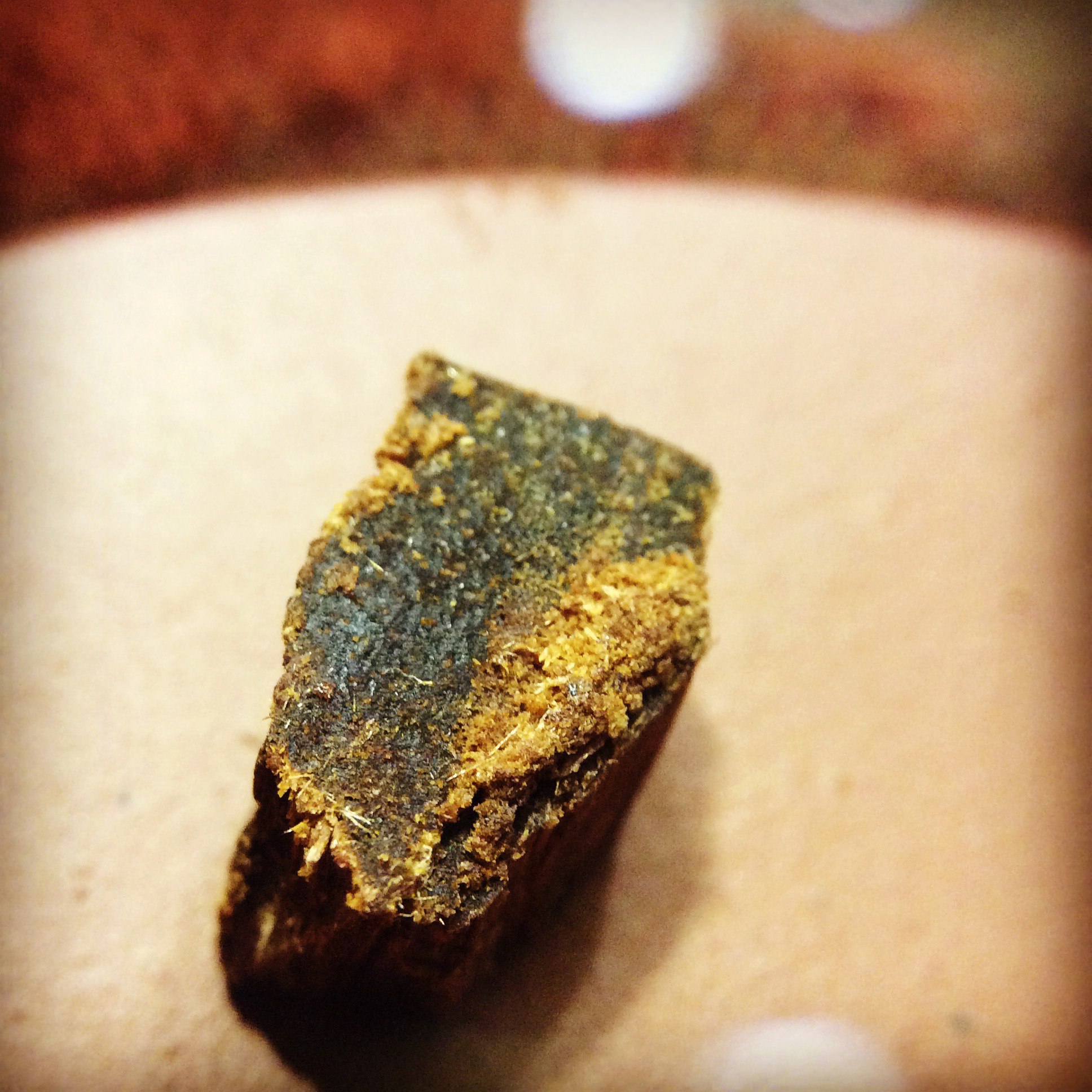 In Vietnam, Cambodia, there are just as many people hoping to strike it rich, hoping to discover bits and pieces of kyara or kynam in the wild, many revisiting places where their forefathers had found the famed material. The demand for authentic and proper kyara is always there. A friend of mine frequents Vietnam, and at the vietnamese agarwood wholesale market, kynam goes for several hundred US dollars per gram for the lower grade ones, and up to eight or nine hundred dollars per gram for the larger and better pieces (this is as per april/may 2015 prices). With this price on the market, and a lot of chinese/hongkong traders waiting to sweep up the good things, if anyone has the proper material, and that is good enough for the chinese eyes, it can turn out to be pretty good money! Do you think there is a trader or a merchant in vietnam willing to sell you kyara for $30, $50 per gram, if they can make 10 fold more selling to the chinese, or even more if they send it to auctions? 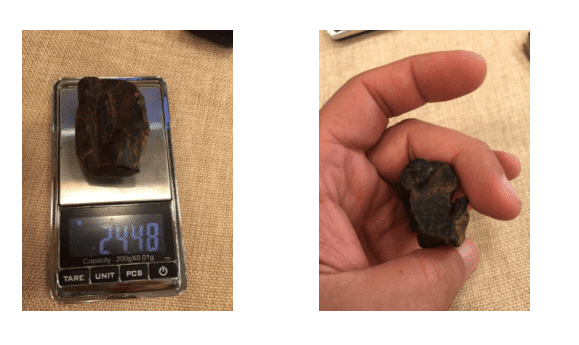 There may be oud vendors that may claim that they used “kyara” or “kynam” / like materials into their distillations, and that the oil is the smell of kynam, kyara etc. To some of these vendors that I had sampled their oils, with due respect, some of these oils are really really excellent scents, some even “regal” in my opinion, some are quite well worth the price they command. But in any way to claim that superbly expensive raw material of kyara-kynam types were distilled, it does not make financial sense! at a 1% yield, you will need $500,000 worth of material (if you auction the wood at sotherby/christies/poly hongkong or beijing) for a tola of oil. if sinking grade material, you will need about $50,000 per tola (unlikely though because sinking grade has very little oil). At such margins, even if the vendor can afford the raw material, it makes no sense for the vendor to sell the oud product at a few thousand dollars per 3ml just to regain a small percentage of the cost. If it is charity, why not give the oil away free, since more than 95% of the cost is not accounted for?

If you’re a deep appreciator of kyara/traditional incense culture, there will always be this indignance when people are ruining what kyara/kynam with the incorrect stuffs. If you are a deep appreciator of ouds, this is the same indignance when someone compares a premium artisanal oud to be no difference to a cheap $10 synthetic/fake mass produced oud. Of course the artisanal oud is superior, and artisans always fairly argue that artisanal oud is better, which is true, since their oils do smell great. Similarly, kyara lovers are trying to fairly argue on kyara matters, and trying to exclude materials that are not the same quality nor type. I hope the oud lovers can be fair to the kyara/kynam lovers in the same light.

Someone might argue that it is a free market, the consumer can decide how he or she wants to spend. If a consumer is happy to buy things that are not authentic and enjoys it, there is nothing really wrong with it. The only “wrong” would occur when the consumer is “duped” into believing something. There’s an ebay seller (german) based in indonesia that is selling Koompassia Excelsa/Malaccensis as “kyara” and even using some of my article contents to sell his stuffs! Last year I heard from friends that an oud vendor was working/discussing with a german person in indonesia with regards to “Kyara”, and I hope that this german person the vendor was working with isn’t the same one as the one on ebay, because it is seriously a new “LOW”.. on how low people can stoop. Passing raja kayu as agarwood or even kyara, is ridiculous. Take an image search on google for raja kayu, it is extremely common. I bought a 10 kilogram log for 25 ringgit or 8 us dollars from a malaysian source. 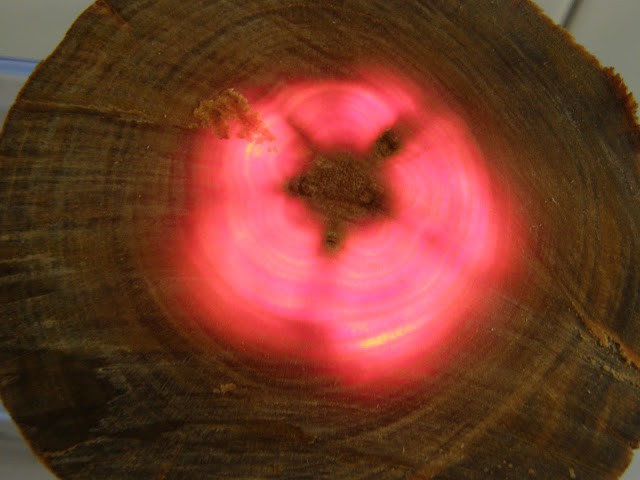 Raja Kayu material passes light if shone with a bright torch. Plasticky texture. when heated, the scent is of cherry/seeds. 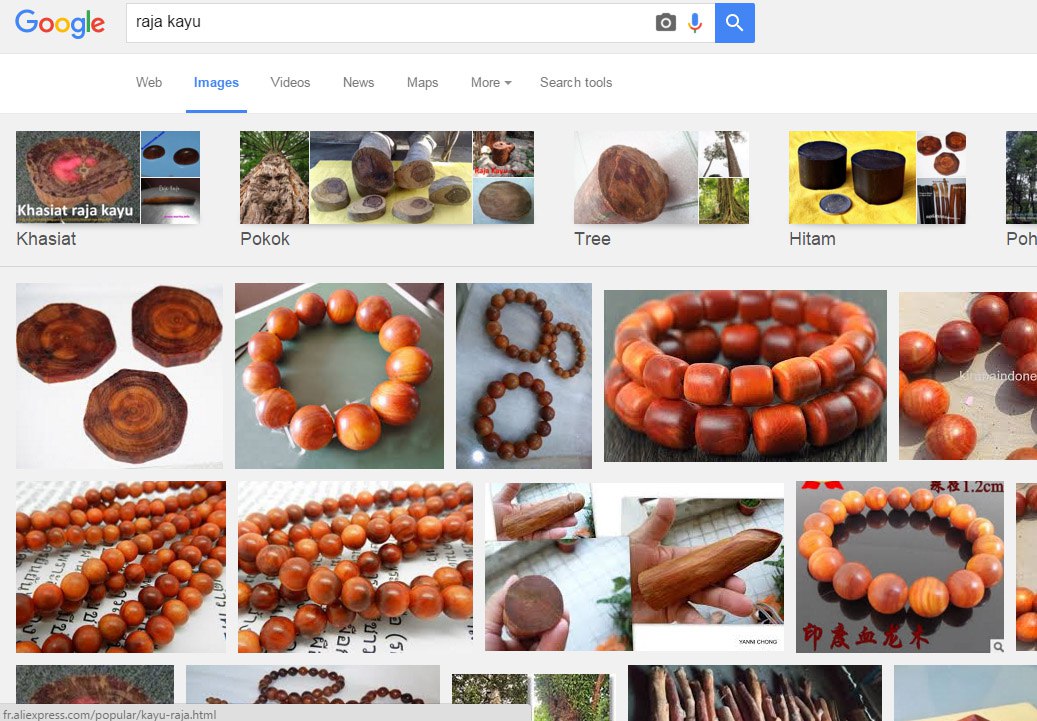 Perhaps the time is ripe for disclosure of a bit more information on kyara/kynam authentication. Authentication is something that is always “hush-hush” and not a matter I would like to discuss too much on, because the top collectors/hobbyists, would always want to have an edge above the vendors.

It has always been known that there are countless unscrupulous vendors that would pass off non-kyara/non-kynam materials as the real thing. Many had always assumed that the “chinese” consumers were “stupid/dumb”, but in actual fact, there is a good proportion that are extremely wise and knowledgeable. You can see my previous soil agarwood article to see the quality/type of materials that the higher end Chinese are playing with, which to me, is extremely impressive. Years ago, there were already authentication strategies for kyara/kynam, in China, so that the wealthy can procure the real stuff without being duped. The rich and powerful only want the real thing, and if anyone dares to fool or cheat them, the merchants’ lives would be in dire straits. More than five years ago, FTIR was already one of the methods of choice, apart from GCMS. (to date, even Raman, terahertz spectroscopy etc, are used in addition). Very little of these is made public, so that only those whom had “access” or the knowledge off, can have the upperhand.  Here are some FTIR profiles of different kyara types 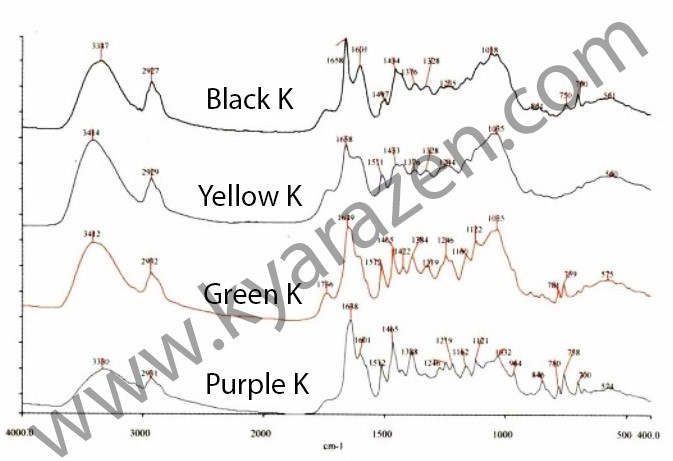 GCMS of Kyara and Agarwood 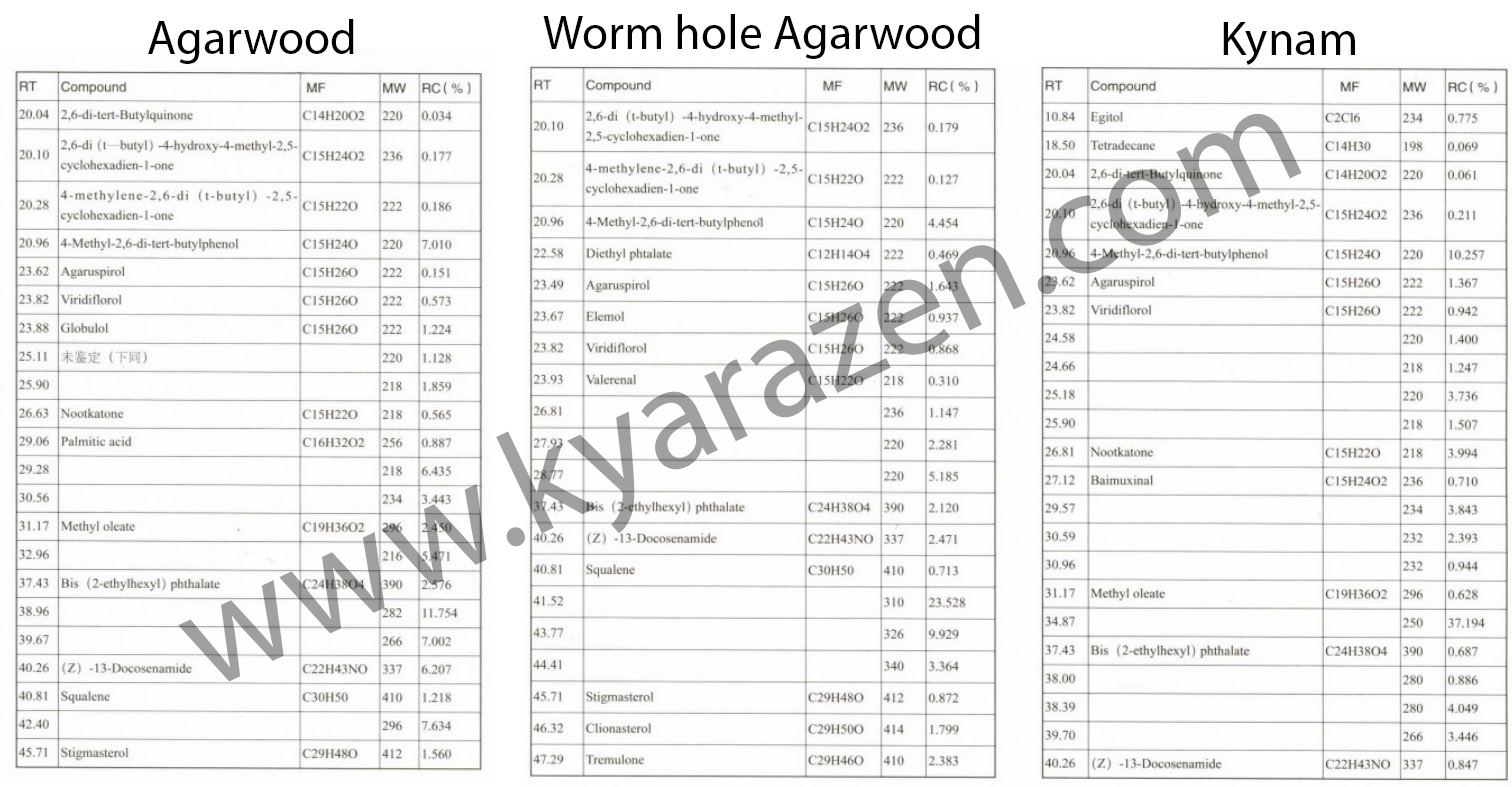 And more conveniently or accessible to most, you can even do a cheap and simple HPTLC. The below image was done by someone in China, I actually have better runs and images but the data was unfortunately lost in a computer crash. Perhaps some day I’ll find the time to redo some HTPLC agarwood vs kyara runs. (hehe, remember the kyara tincture article a couple of years ago?..actually… the tinctures were intentionally made for HPTLC analysis). 😛 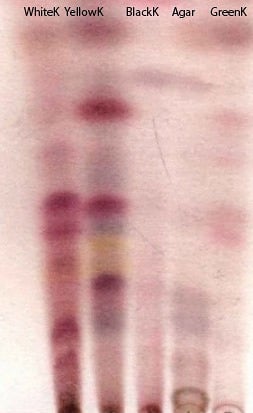 So the next time if someone has a big piece of kyara to sell, or loads of it, fret not, technology has caught up with authentication, so feel free to take if, if real, to the big auction houses or the big dealers in China. They will pay you good money for it, not tiny dollars on the internet.