You are here: Home / Articles / Bad incense or tea day

Recently I came upon a post from someone on a forum that he had a bad tea day despite having followed the exact same procedures in the preparation, from the water quality, to the boiling, to the pot, to the quantity of tea leaves in weight, same steep duration etc, and the tea was not as good as previously experienced. Another person present at the session confirmed this as well.

Was the person’s taste buds, or body constitution, or mood at that point of time, a major determinant? Probably not. It is just the nose and the related olfactory receptors playing tricks.

Just for fun, you may wish to try the following experiment.
1) Brew up a cup of your favourite tea and take a sip, swallow whilst pinching your nose.
You would probably realize that you are just having some sweet/bitter water which is rather uninteresting. As you are swallowing with your nose pinched, the air that is displaced during the swallowing process ends up being exhaled through the mouth.

2) Next, you might want to take a small sip of the same tea again, but without pinching your nose this time round, the aromatics and complexity is back!

3) Repeat the tea sipping and exhaling the displaced air through either the left or the right nostril by pressing on either side. You will observe that both nostrils don’t agree with each other, and they perceive the scent profiles differently. This is not something extremely novel since such matters had been published and discussed since a couple of decades ago. 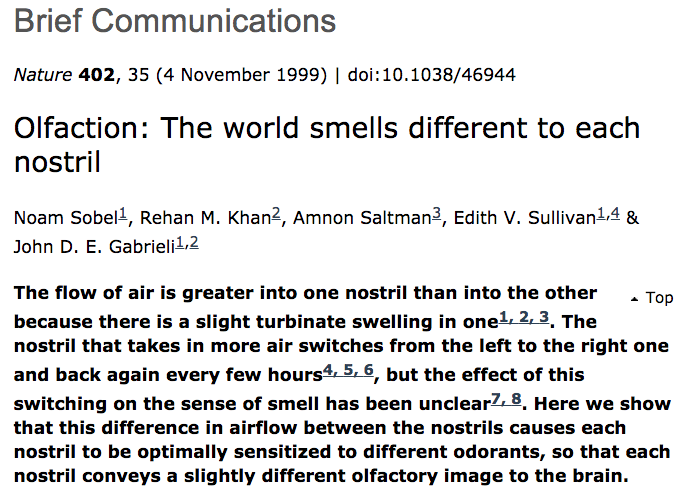 Here-in lies a tip in tea tasting that can enhance your taste mastery. Learn to hold and delay that pocket of displaced air from swallowing the tea and slowly/consciously push it out of the nose slowly, allowing the air to fill your nasal cavity before it escapes. After that, you can also consider exhaling the next few breaths in the same way and you may find the tea fragrance lingering.

Our sense of smell forms the foundation of our enjoyment of worldly delights. This sense perception is mediated by the olfactory bulb where lots of g-protein coupled receptors residing there are waiting to respond to scent molecules. There are two paths of scent entry if you refer to the picture below. The most directly way of entry is upon inhalation, sniffing things, tea, incense smoke, perfumes, oud oils. Our olfactory system is well tuned to good/appreciable smells, our reflexes respond to comfortable smells by allowing free entry of the scents carried by inhaled air. Once a bad or foul smell appears, the olfactory system immediately responds by temporarily halting inhalation for a split second or slowing it down to tiny puffs.

The other route to which scents can reach the olfactory bulb is through the “backdoor”, or upwards from the throat/nasal pharynx into the nasal cavity. In your tea experiment just now, you utilized this route.  By being able to hold air from either routes of entry in the nasal cavity, and the slow inhalation/exhalation that follows, gives one a heightened sense of olfaction.

So, why do bad tea days or bad incense days happen?

Simple. The olfactory sense is affected by humidity. The olfactory epithelium is constantly kept moist so that odorants can dissolve in the thin wet microenviroment that the olfactory receptors are bathed in. If moisture in this region is reduced, either due to extreme dry air, or an extremely dry mouth (yes! your lungs and exhaled breath does contributed to hydrating and moisturizing the nasal cavity), the sense of smell loses its acuteness and one may become temporarily anosmic to some smells or scents that have very low intensity. During dry weather, i.e. during winter, you may wish to try inhaling the scent of the steam given off by a cup of hot tea, you will find it rather easy to smell various notes because of the added moisture the steam has.

On the other hand, in a separate article, I had also mentioned that incense burns differently in different humidities as well. So you can see how complicated this whole matter can be, leading to possibly more variables that cause bad incense days.

Olfactory masking does occur as well. If you have an essential oil dissolved in ethanol, if you smell it directly or straight after spraying it on yourself, you will be hit by the sharp ethanol note that temporarily occludes or overwhelms the scent of the dissolved essential oil. As the ethanol dissipates during the dry down, the actual scent of the perfume appears. During this process, you may observe that when smelling perfume in ethanol, one is really cautious, little gusts, controlled short bursts of inhalation. This due to the body’s natural tendency to block off or reduce the entry of sharp/uncomfortable smells. Personally, when assessing incense, particularly that of anything burnt, i.e. sticks, I would also take in only very small gusts of inhalation, this enhances olfactory acuity and at the same time, does not cause saturation of olfactory responses (after which one becomes temporarily anosmic!). This is one of the important things to take note during incense appreciation. Personally I do not like long term retension of molecules within the nasal cavity or long term stimulation of the olfactory bulb. It causes saturation and dulls the senses and may have long term consequences. 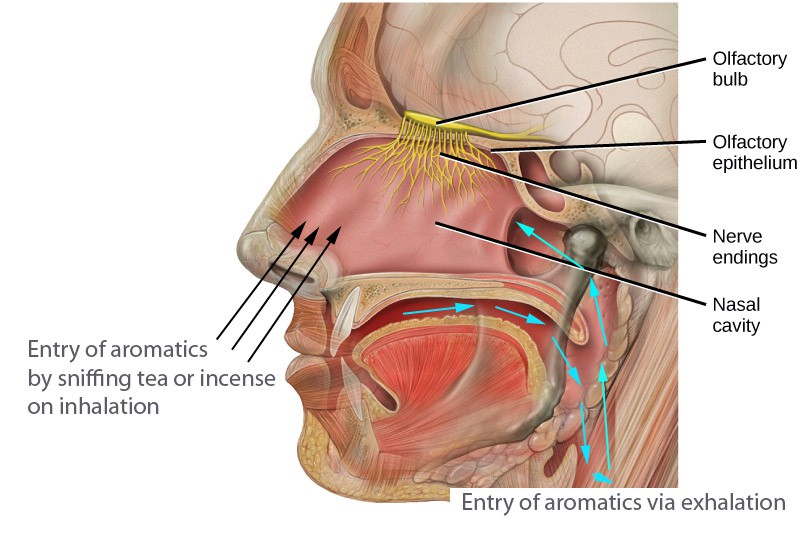